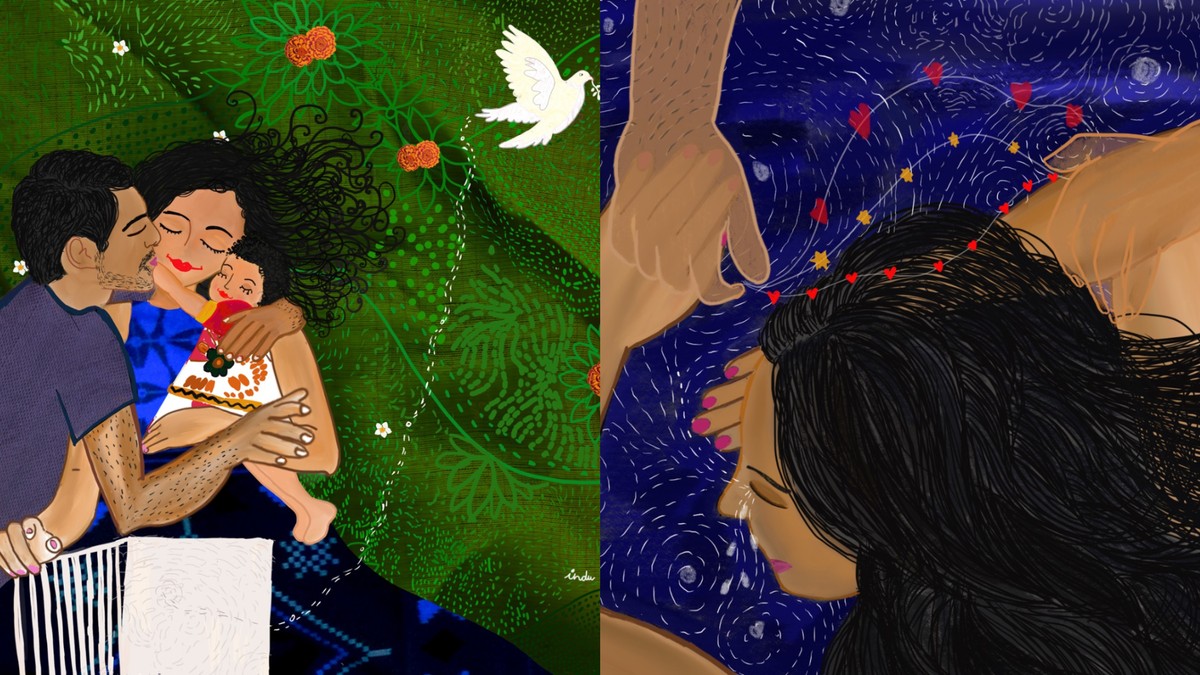 Illustrations by Mumbai-based illustrator Indu Harikumar under the hashtag #MyAbortionStory, which features personal stories of how women discovered their pregnancy and everything that followed. IMAGES: INDU HARIKUMAR

“I had just turned 26, my partner was unemployed [and] I had a hard time understanding life,” an anonymous woman said in an Instagram post from the My Body My Choice campaign. She explains how she found out she was pregnant, after days of dizziness. “What started after that was an excruciating process of figuring out how, when and where to get an abortion.”

“I had stomach cramps all of a sudden and had a deep sense of loss,” said another woman, describing her abortion story.

Some women talk about their guilt. Others describe how the abortion changed their relationships and affected their sex life.

It is these kinds of stories that expose the reality of abortion in India. Every year, the country’s women face shame and stigma, in addition to a frightening lack of information provided to them about their own bodies and reproductive systems.

Overall, even for married women who typically wouldn’t feel as much social shame in this regard, women across the country are exposed to a toxic narrative when it comes to their personal choices. This is despite the fact that termination of “certain pregnancies” has been legal in India under the Medical Termination of Pregnancy (MTP) Act since 1971. It is a country where unsafe abortions are the third leading cause leading cause of maternal deaths, and 80% of Indian women have no idea that abortion within 20 weeks is in fact legal. The procedures and their consequences continue to be shrouded in secrecy and marked by taboos.

But there are people working to change this change, wanting to put agency in the hands of Indian women themselves when it comes to this part of their lives.

Stories are one facet of the My Body My Choice campaign. Run by a coalition of partners including Global Health Strategies, Youth Ki Awaaz and Agents of Ishq, the campaign advocates for a consolidated end to all stigma surrounding abortion. By gathering stories and factual information, the initiative aims to create a safe space, through which abortion can be discussed and understood openly by women in India.

In collaboration with Mumbai-based illustrator Indu Harikumar, campaign organizers released a series of cartoons under the hashtag #MyAbortionStory. The crowdfunded illustrations show how the women found out about their pregnancy and everything that followed: from telling loved ones, to deciding to have surgery, to how they coped afterwards. 25 women across India told their stories – their pain, their vulnerability, their acceptances – to Harikumar, who then turned it into art.

“Unfortunately, even today, a woman’s right to decide is debated in parliaments around the world – reiterating the misconception that a woman can only make legitimate decisions if her decision is approved by others. “, Nidhi Dubey, vice president of Global Health Strategies, an advocacy center aimed at improving health care around the world, told VICE. “That’s also where the stigma comes from. A woman’s right to conceive, abort or carry her pregnancy to term is his decision to be made. »

The campaign, which currently focuses primarily on its digital presence, has reached more than 80 million people so far, according to Dubey. “My biggest hope for the campaign is that it gives a voice to more women and girls who are too often silenced. I think the inclusion of young voices in the campaign is particularly important, given that the India’s adolescent population is booming and yet young voices and experiences of young people are often deprioritized in policy discussions,” Dubey said. “If conversations continue to be quiet, policy reforms aimed at making safe and legal abortion more accessible will remain an uphill battle.”

The campaign runners are prioritizing telling the stories of young people, giving a voice to those who are “often underprivileged”. The resulting projects are colorful, honest, and hard to ignore.

Take their work with Agents of Ishq (AOI), an Indian multimedia project dedicated to sex, love and desire. My Body My Choice and AOI have converged their philosophies to create a “Bollywood-style” video to tackle pregnancy and abortion myths. Adorned with fun graphics and light language, the video was posted on September 28, widely recognized as International Safe Abortion Day.

“Sex and love continue to be strongly tied to marriage – and women, despite the changes, rarely have much autonomy over their own bodies,” Paromita Vohra, creative director of AOI, said in an interview. with VICE. “Abortion is fundamentally about a woman’s right to choose—when to have sex and what decisions to make about pregnancy. It threatens the mindset of morality that surrounds gender issues. We continue to talk about women primarily as wives and mothers and refuse to see them as autonomous beings, especially in terms of sexual health.

The petition presented by the My Body My Choice campaign calls for the outright termination of the MTP Act. Essentially, they believe that the choice to abort should rest solely in the hands of women, regardless of the 12-20 week policy. They also call on providers to focus more on women in their approaches and on society to work together to end stigma.

The many organizations behind these efforts are pushing to end all stigma surrounding abortions, linking deep-rooted societal attitudes to the prevalence of unsafe abortions in the country. They point out that a properly performed abortion is one of the safest medical procedures in the world. But the termination of a pregnancy made without the necessary medical standards can go quickly and radically wrong.

“With fear of embarrassment clouding their decision-making, many women have no choice but to explore low-key, covert options. ‘Log kya kahenge? [What will peple say?] ‘ comes before their own well-being and health,” Dubey explained. “And if confidentiality is not respected? “, “And if my family or my friends learn to know it? are unfortunate, but dominating thoughts that women have to struggle with.

Both Dubey and Vohra say women across India are forced to visit “quacks” or find certain pills on their own. These are all unauthorized and rooted in danger methods.

This haunting reality is only cemented by the numbers. In 2018, it was estimated that 13 women in India died every day from unsafe abortions.

According to a 2018 report published by the Guttmacher Institute, a research organization dedicated to the study of sexual and reproductive health, the MTP law was implemented in order to “protect women from the serious risks of unsafe abortion. “. But the report goes on to point out that unsafe abortion procedures are, however, all too common across the country. The institute said unsafe abortions are the third leading cause of maternal death in the country.

Recently, health officials, doctors and activists across the country have also been pushing for an altogether more humane act. In September 2019, the Union Department of Health submitted a petition to amend the bill, which is currently before the Supreme Court. The changes would ensure that abortions are made safer and more accessible – for example, the 20 week deadline for a procedure would be extended. Other suggested reforms would allow women to have autonomy over the procedure.

But some solutions can be found at the local level. As Vohra points out, education is the most effective method for women to understand their rights in relation to their bodies and their choices.

“Information is necessary – it helps us a lot to make the right choices, and the main reason why we don’t have or seek information is shame and taboos,” she said. “It’s the most effective way not only for us, but for all societies.”