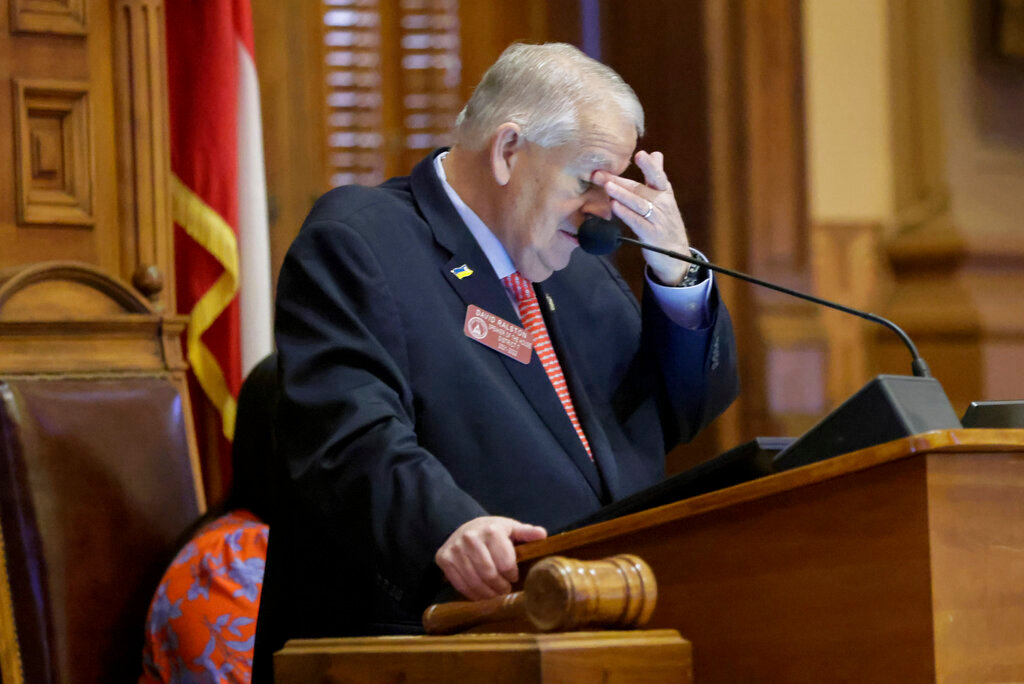 ATLANTA (AP) — Georgia lawmakers pushed through dozens of bills in a swift conclusion to their 2022 session on Monday, offering a tax cut and banning teaching about “divisive concepts” in law enforcement agencies. schools. But lawmakers failed to take a step that could have required physical exams before a woman could be prescribed abortion pills, rejected an expansion of gambling and denied a further pay rise for themselves. Some key proposals have already been passed, including a mental health reform measure, a relaxation of gun laws and a bill allowing parents to remove their children from school mask mandates. Other measures died earlier, including a bill that would increase penalties for unlawful acts during protests and an attempt to regulate social media.

MENTAL HEALTH: House Bill 1013 seeks to require insurers to pay for mental health and addiction treatment the same way they pay for other health care. The measure also allows a police officer to take someone in for an evaluation after getting permission from a doctor, instead of arresting them for a crime.

GASOLINE TAX DAY: Bill 304, signed into law, suspended state fuel taxes through May 31, including a levy of 29.1 cents per gallon for gasoline and 32.6 cents per gallon for diesel. Suspending collections could take more than $400 million away from road construction. The governor plans to use some of last year’s surplus to replace the cash.

INCOME TAX CUT: The House and Senate agreed to create what would be a potential state income tax at 4.99% in House Bill 1437. The rate would be implemented in stages over a number of years, depending on income.

TRANSGENDER ATHLETES: The Georgia High School Association would be allowed to bar transgender boys and girls from playing on public school sports teams that match their gender identity under Bill 1084.

CRITICAL RACE THEORY: House Bill 1084 would ban the teaching of certain racial concepts that Republicans say are divisive. Opponents say the measure would scare teachers away from honest classroom discussion about race in history and the present.

INCOME TAX REFUNDS: Bill 1302, signed into law, provides $1.1 billion in income tax refunds, including $250 to single filers, $375 to single adults who lead a household with dependents and $500 for married couples filing jointly.

FIREARMS IN PUBLIC: Senate Bill 319 would abolish Georgia’s background check and license requirement to carry a handgun in public. Republicans say it violates Second Amendment gun rights for people who must apply for a license and pay a fee, usually around $75.

PARENTS’ STATEMENT OF RIGHTS: House Bill 1178 would put into one law a number of parental rights that already exist, including saying that parents have the right to review all school materials.

MASKS IN SCHOOLS: Senate Bill 514, already signed into law, will allow parents to exclude their children from mask mandates.

RIGHT TO FARM: House Bill 1150 would strengthen protections for farmers from nuisance lawsuits brought by neighbors for issues such as odor, shielding them from most lawsuits after two years of operation.

LEGISLATIVE PENSIONS: Legislative pensions would increase by about 40% under Bill 824.

GAMBLING: Senate Resolution 135 would have legalized all forms of gambling – including sports betting, horse racing and casinos – if voters had approved a constitutional amendment. Senate Bill 142 would have regulated sports betting. The resolution was amended to reduce timber taxes.

ABORTION PILLS: Senate Bill 456 would have required a woman to undergo a medical exam and ultrasound in person before she could be prescribed abortion pills.

LEGISLATIVE COMPENSATION: The salary of Georgia’s 180 House members and 56 senators would have reached 50% of the state’s median household income, up to about $30,000, under a constitutional amendment proposed by the House Resolution 842.

MEDICAL MARIJUANA: House Bill 1425 would have changed the way licenses are granted under the state’s medical marijuana program in an effort to reinvigorate a licensing process tied to legal issues.

FELONY BAIL: Senate Bill 504 would have required cash bail for a judge to release from jail anyone charged with a crime.

PROTESTS: Senate Bill 171 would have required a permit for any gathering, increased criminal penalties for protests, made it a crime to block a highway or deface a monument, let people sue local governments if protests became violent and made it legal for someone to run over someone else fleeing a protest if the fleeing person believed their life was in danger.