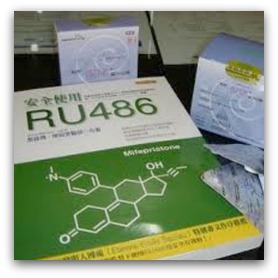 The “abortion drug” RU486 kills embryos. RU486 or mifepristone destroys the lining of the uterus so that the developing embryo detaches, is deprived of nutrients and starves to death. A day or two later, another drug called misoprostol is used to induce contractions and expel the now dead embryo.

I find it distressing to contemplate that embryos are killed in this way. I also find it sad that so many Australian girls and women find themselves in a situation where abortion seems to them to be their best alternative. I would say that nobody really wants an abortion. But when women are faced with an unplanned pregnancy, they may feel trapped and that abortion is the only escape.

In September last year, an article was published in the Medical Journal of Australia on the use of RU486 in that country. This reported on 13,345 chemical abortions using RU486 between September 1, 2009 and August 31, 2011 at 15 Marie Stopes sites in Australia.

Most women reported moderate to heavy bleeding and moderate to severe cramping. The study also detailed 519 cases in which things did not go as planned. There were 382 cases in which the abortion was not complete and surgical aspiration of the uterus was required. In 83 cases, the pregnancy continued.

There were 16 cases of haemorrhage, 11 of which required blood transfusion. There were four cases of known infection and 21 cases of suspected infection. One woman died from complications. There were also at least 15 other Deaths linked to RU486 around the world.

The risk of physical complications after a chemical abortion is relatively small, but real. The likelihood of psychological problems – even deep issues like post-traumatic stress disorder – is much greater.


In 2005, Selena Ewing of Women’s Forum Australia reviewed all abortion papers that had subsequently been published in peer-reviewed journals over the previous 15 years. From this review of 168 papers, she concluded that there is “substantial evidence of psychological harm associated with abortion…Ten to 20% of women experience serious psychological complications after an abortion.”

There is currently a proposal to include RU486 and misoprostol as subsidized drugs under the Pharmaceutical Benefits Scheme. There is also opposition to this, as there should be. Girls and women in Australia who face unplanned pregnancy deserve better from our society than cheap abortion drugs.

If we are concerned about abortion in Australia and the dilemmas facing Australian women, what should we be doing in the months and years to come? I can think of at least four things.

Bernadette faces an unplanned pregnancy when she was 16. Her son Damien is now 20 years old. If you have met Damien, you would be happy that Bernadette allowed Damien to be born. And if you considered the bond between Damien today and Damien as he was in the womb, you would exercise your metaphysical imagination.

Second, we need to provide honest sex education. No method of contraception, except sterilization, is completely reliable, so in heterosexual relationships there is always a chance of pregnancy. If someone and their proposed sex partner are unable to make a vital decision about a possible pregnancy, they are not ready for sex.

Their vital decision could be to be able to keep and raise their child or, if this is not possible, to continue the pregnancy to term and put their child up for adoption. With the open adoption that we practice today, they will be able to keep in touch with their child, and visit him several times a year.

Third, we must support girls and women facing unplanned pregnancy who are considering abortion. John Paul II said in these cases “the only honest position is…radical solidarity with women”. Around Australia there are many groups and people who offer practical support to women facing unplanned pregnancies or who need help raising the children they have chosen to keep.

Fourth, we must offer support and hope for healing to women and men who have been hurt by abortion. After an abortion, many women suffer for many years of grief, guilt and remorse. Often they suffer in silence, their abortions remaining a shameful secret. We need to find ways to help these women. Rachel’s Vineyard retreats in capital cities around Australia offer such an option.

The proposal to provide cheap abortion drugs is a wake-up call for those of us concerned about abortion in Australia and the dilemmas facing Australian women.

Father Kevin McGovern is the director of the Caroline Chisholm Center for Health Ethics, which is sponsored by Catholic Hospitals Victoria.

If there is one thing that the recent election campaign and its outcome has demonstrated, it is the depth of the divisions that exist in our Australian community.

Our policy is focused on scoring, personalities and slurs across parties. The media, for the most part, is not helping, driven by the 24-hour news cycle and the pursuit of advertising dollars into a frenzy of click-bait and superficial sensationalism.

What does it mean to be an Aussie in times like these? What are the values ​​that unite us?

Eureka Street offers an alternative. It’s less a magazine and more a broad conversation about the issues that matter to our country and our world; a conversation marked by respect for the dignity of ALL human beings.

Importantly, this is a conversation that takes place in the open, unhindered by paywalls or excessive advertising. And it is thanks to the support of people like you that he is able to do so.